In this day and age, text files are produced, edited, copied and delivered digitally. Paper, mail and courier services for scripts are a thing of the past. Even at film shoots, tablets are replacing bound scripts.

Your script should be formatted in standard screenplay format if it's intended for film, TV, video or audio drama.

Film Writer offers formatting as a service, but there should be a prior effort to produce a properly formatted draft.

The first page of a screenplay looks like the following sample: 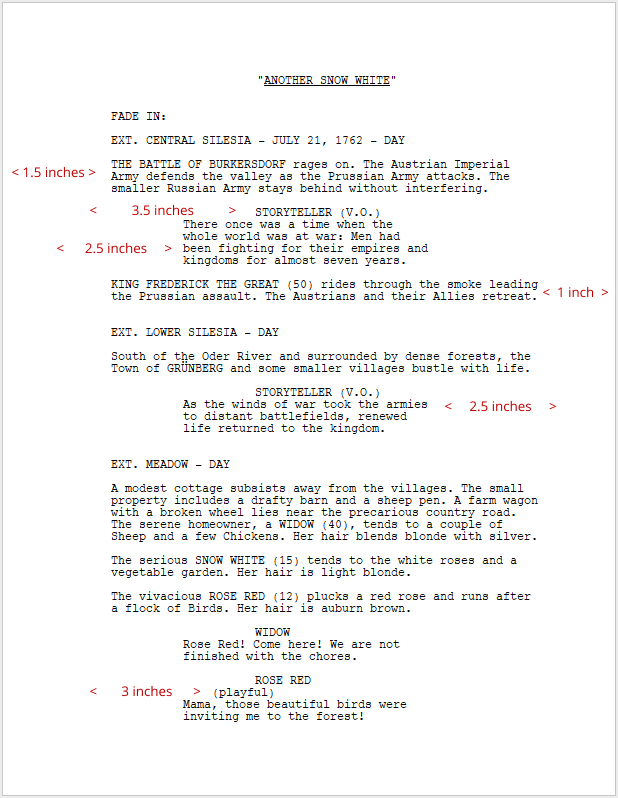 Stage plays are formatted differently than scripts for narrative media. There are a few accepted formats instead of a single universal one. If your project is intended for stage, please submit it in an adequate play format. If you intend to produce your play in a different medium, you may need to consider adapting it into a screenplay.

Treatments are written in prose with little dialogue. Their main utility is to tell the whole narrative before writing a detailed screenplay. If you plan to submit your treatment to a grant or producer, Film Writer can help you polish and edit it.

Other literary forms, such as novels, short stories or comics cannot be treated as a script. Please adapt your work to screenplay format or discuss adaptation services with Film Writer.

Pitch decks, bibles and other supporting documents cannot replace the script. Film Writer may be able to add feedback or editing services for such documents on top of the base service for your script after discussing your additional needs.

Screenplays should be written in 12-point Courier font exclusively.

Treatments can be written in 12-point Courier or Arial fonts.

A properly formatted script leaves enough white space on the page to make it readable. A script page should average a minute of screen time, so a 100-page script should be the equivalent of a 100-minute film. This ratio applies to most formats, not just cinema.

A feature-length script measures between 70 and 120 pages. Of course, there are 200-million dollar epics that film a 200-page script, but with that kind of budget, those privileged filmmakers can break all the rules they want.

If your current draft is over 130 pages long, please make an effort to shorten it as much as possible before handing it to anyone else. Film Writer will help you bring your script down to 120 pages or less, but be advised that the longer the script is, the more work and time it requires, which affects the service fee.

A script for a TV pilot or episode measures between 25 and 40 pages for a half-hour show or 45 to 70 pages for a one-hour show. You should check the requisites of wherever you intend to submit the script as there might be more specific page limits. For instance, an episode for broadcast TV has to account for commercials, reducing the number of pages. On the other hand, the scripts for "Gilmore Girls" were quite longer than usual to account for the amount of quick-delivered dialogue characteristic of that show.

A script for a short film should be under 25 pages.

Tricks like shortening the page margins or reducing the font size to decrease the page count are seen as a terrible cheat and must be avoided.

You can use any standard word processor (such as Microsoft Word) to format your script by manually adjusting margins, tabs and indentations. You can also use a predefined template, which might include macros.

However, the best option is to use professional software dedicated to scriptwriting. Currently, the market offers several options to fit your needs, work style and budget.

Please visit the Resources section for free templates and recommendations on software and screenwriting books.